Olga was born on February 2, 1870 in St.Petersburg and was trained at the Imperial Ballet Academy. She studied with such teachers as Enrico Cecchetti, Christian Johansson, and Nicholas Legat. Olga graduated in 1889 and immediately joined the Maryinsky Theatre. In 1896 she was made a soloist, and four years later, Prima Ballerina. Olga Preobrajenska was one of St. Petersburg's beloved Prima Ballerinas. The audiences loved both her personality and her strong technique. Her extensive repertoire included leading roles in Coppellia, La Fille Mal Gardee, Esmeralda, The Nutcracker, Sleeping Beauty, and Les Sylphides.  Olga dominated the ballet stage for the first two decades of the twentieth century. She appeared in over 700 productions in addition to participating in several tours.
Later, Olga became very well known as a teacher. She started teaching in 19

14 while she continued to dance. After leaving the Soviet Union in 1921, Olga taught in Milan, London, Buenos Aires, and Berlin before she settled permanently in Paris in 1923. Nearly every famous dancer of the time was trained by her at "Salle Wacker," including Irina Baronova, Tamara Toumanova, Tatiana Riabouchinska,Igor Youskevitch, Olga Spessiva, Anna Pavlova and Margot Fonteyn. Agrippina Vaganova was also a student of Olga's. Agrippina Vaganova later created her method of dance taught by the Maryinsky Theatre and other major ballet schools, to this day.
It was also in her Paris studio, Salle Wacker, that Balanchine came when looking for young dancers for the Ballets Russes. This is where he found his “baby ballerinas”: Toumanova, Baronova, a

nd Riabouchinskaya.
For many years, Olga's Paris studio, at 69 Rue de Douai, was the unofficial networking centre for the international dance community until it was demolished in 1974. Olga had continued to teach until she was 90 years old, retiring in 1960. She died two years later.

February 13 marks the birthday of Felia Doubrovska. She was born in Russia. She trained at the Imperial Ballet School and was accepted into the Maryinsky Ballet in 1913. She joined Diaghilev's Ballets Russes in 1920, creating roles in Nijinska's Les Noces in 1923, Balanchine's Apollon Musagète, and Prodigal Son in 1928 and 1929.
When she took over a role from Bronislava Nijinska, Diaghilev told her, "You're too tall for the costume, but you have perfect taste, so go to Coco Chanel and order anyth

ing you like."
Felia married acclaimed Russian dancer, Pierre Vladimiroff and they emigrated to the West where they joined the Ballets Russes. Later Pierre danced with the Mordkin Ballet and joined Anna Pavlova's company. From 1934 to 1967 Pierre taught at the School of American Ballet, being the first teacher of the newly founded school to teach the male students. 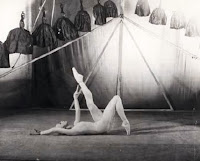 Felia was guest ballerina with Col. de Basil's Ballet Russe in 1937 and later joined New York's Metropolitan Opera Ballet Company from 1938 to 1939. She retired from performing and became a distinguished teacher at Balanchine’s School of American Ballet, until her death at the age of 84. 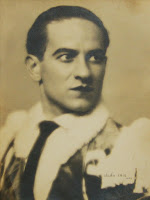 Leon was born in Poland. He trained with Warsaw Imperial Ballet School and then studied with Enrico Cecchetti. Leon joined Diaghilev’s Ballets Russes in 1916 and was an outstanding character dancer. After Diaghilev’s death,

In 1935, he formed Leon Woizikowski’s Ballet Russe where is daughter, Sonia, Lydia Sokolova and Igor Youskevitch danced for his company. After the affair was made public Helena and Sonia eventually came to the United States, while Leon remained in Warsaw.
Lydia Sokolova – Died February 5 Lydia Sokolova was born, Hilda Munnings, Lydia was Diaghilev’s first English ballerina. She trained at London’s Stedman Ballet Academy. She joined Diaghilev’s Ballets Russes in 1913 and remained there until his death in August of 1929.
Lydia’s most famous role was Chosen Maiden (seen in photo) from Leonide Massine’s revival of Le Sacre de Printemps in 1920. After Diaghilev’s death, Lydia danced with Leon Woizikowski’s Ballet Russe company starting in 1935.

Mia was born in 1914 in Yugoslavia. She studied in Zagreb with Josephine Weiss, then in Vienna with Leo Dubois. When she moved to Paris she continued her studies with Lubov Egorova, Mathilda Kschessinska and Olga Preobrajenska.

Mia became ballerina of the Zagreb Opera (1930-33) and joined the Paris Opera in 1933, dancing with Serge Lifar. In London she danced with Anton Dolin before joining the Ballet Russe de Monte Carlo (1938-42). She later formed her own company, Ballet Variante. Mia also continued to dance as a guest artist for many major ballet companies, and in 1953 she established the Slavenska-Franklin ballet company with Frederic Franklin. One of the roles she created was Blanche Dubois in Valerie Bettis' A Streetcar Named Desire.  In her final years, she taught ballet in Los Angeles. She passed away on October 5, 2002.

Slavenska starred in a wonderful French film, La Mort du Cygne (1938), in which she and Yvette Chauviré (who later became a prima ballerina of the Paris Opera Ballet) played rival ballerinas. Janine Charrat, who became one of France's leading choreographers, played a young ballet student. You may have seen the Hollywood version, called The Unfinished Dance (1947), which I think set ballet in this country back a hundred years.

Nathalie passed away February 8, 2005. Nathalie was born in Lennigrad, Moscow in 1919. Her mother was a dancer with Diaghilev's Ballets Russes and her grandmother was a soloist with the Bolshoi Ballet. She studied with Olga Preobrajenska in Paris and Legat in London.

She danced with Nijinska's Company in Paris 1932, with Balanchine's Les Ballets 1933 and with Serge Lifar in South America 1934. She then danced with the Ballet Russe de Monte Carlo 1936-1950 and with the London Festival Ballet 1950-1955. Nathalie performed in Warner Borthers movie featuring the Ballets Russes de Monte Carlo called Gaite Pa

Jack Anderson, dance critic for the The New York Times, remembers Madame Krassovska as the first ballerina he ever saw perform the Black Swan Pas de Deux from Swan Lake, leaving he said, "an indelible impression."

After her dancing career she settled in Dallas, Texas and worked as a ballet teacher.

Nijinska danced in her brother Nijinaky’s short lived ballet company in London in 1914. In 1915 she returned to Russia. Nijinska danced in Kiev, opening a school where she trained her most famous student, Serge Lifar.

One of Bronislava's first pieces was Three Ivans for Petipa's The Sleeping Beauty. Her first ballets were Igor Stravinsky's Renard in 1922 and Les Noces 1923. The following year she choreographed Les Biches (photo right), Les Fâcheux and Le Train Bleu.  Bronislava later choreographed for the Paris Opéra, Opéra Russe à Paris, and her own company. Occassionally she taught at the American Ballet Theatre School in New York City.

Christian, also known as Bébé, was a French artist, fashion illustrator and designer.  Bérard and his lover Boris Kochno, who directed the Ballets Russes, was also co-founder of the Ballet des Champs-Elysées,

Born in Paris in 1902, Bérard studied at the Lycée Janson de Sailly as a child. In 1920, he entered the Academie Ranson.  Bérard showed his first exhibition in 1925, at the Gallery Pierre.

From the start of his career he had an interest in theatrical scenery and costume designs, and played an important role in the development of theatrical design in the 1930s and 1940s.   He also worked as a fashion illustrator for Coco Chanel, Elsa Schiaparelli, and Nina Ricci. Bérard's most renowned achievement was probably his lustrous, magical designs for Jean Cocteau's 1946 film La Belle et la Bête.

Bérard died suddenly in 1949, on the stage of the Théâtre de Marigny. Francis Poulenc's Stabat Mater was composed in his memory.

Alexandre's father Nicholas Benois and brother Leon Benois were noted Russian architects. Alexandre didn't plan to devote his life to art and graduated from the Faculty of Law,

St. Petersburg University in 1894. Three years later, while in Versailles, he painted a series of watercolors depicting Last Promenades of Louis XIV. When exhibited by Pavel Tretyakov in 1897, they brought him to attention of Sergei Diaghilev and Leon Bakst. Together they founded the art magazine and movement Mir iskusstva which aimed at promoting the Aesthetic Movement and Art Nouveau in Russia.

In 1901, Benois was appointed scenic director of the Mariinsky Theatre where he devoted most of his time to stage design and decor.  He designed sets and costumes for Dighilev’s

Ballets Russes productions of Les Sylphides in 1909, Giselle in 1910, and Petrushka in 1911.  Although he worked primarily with Diaghilev for the Ballets Russes, he simultaneously collaborated with the Moscow Art Theatre and other notable theatres of Europe.

Benois edited Mir iskusstva but also pursued his scholarly interests preparing and printing several monographs on the 19th-century Russian art and Tsarskoye Selo. From 1918 to 1926, he ran the gallery of Old Masters in the Hermitage Museum, to which he secured his brother's heirloom—Leonardo's Madonna Benois. In 1903, he printed his illustrations to Pushkin's Bronze Horseman.

Born February 12, 1881, in a military hospital in St. Petersburg, Anna Pavlova was the illegitimate daughter of a laundry-woman. Her father was said to have been a young Jewish soldier and businessman. The young Anna Pavlova was raised by her grandmother at her villa in Ligovo, an upscale suburb of St. Petersburg. It was there she became acquainted with aristocratic society and attended ballet performances at the Imperial Maryinsky Theatre. When she saw The Sleeping Beauty performed, Anna Pavlova decided to become a dancer, but was rejected at the age of 8, and practiced at home for two years. At the age of 10, she was examined and admitted by Marius Petipa to the ballet class at the Imperial Ballet School in St. Petersburg. There she practiced ballet routines for eight hours daily and also studied music.

Anna was said to have a perfect pitch. As a ballet student, Pavl

ova adopted a strict diet with emphasis on fish and vegetables and followed the diet through her entire life. She lived at the Boarding School of the Imperial Ballet until her graduation at the age of 18.  Ballerinas Tamara Karsavina and Mathilde Kschessinska were among her classmates. Anna made her debut on September 19, 1899, and worked with the Maryinsky Ballet from 1899-1907.  Ann performed with Diaghilev’s Ballets Russes in 1909 for their premier performance in Paris.  She did not stay with the company, however, she believed that Diaghilev’s attention was too much on Nijinsky.  Anna did return to dance with Diaghilev’s Ballets Russes in London in 1911.

Later, Anna Pavlova toured the world with her own company keeping a home in London, where her exotic pets kept her constant company when she was there. Anna shared her home with Victor Dandré, her manager, her companion, and he may have been her husband, stories conflict.

While her contemporary, Isadora Duncan, introduced revolutionary innovations to dance, Anna Pavlova remained largely committed to the classics.  America loved Anna and she was responsible for helping to make ballet popular for little girls all across the country. She soon became known as the "Sublime Pavlova."