Parade is a ballet with music by Erik Satie and a one-act scenario by Jean Cocteau. The ballet was composed 1916-1917 for Serge Diaghilev's Ballets Russes. The ballet premiered on May 18, 1917 at the Theatre du Chatelet in Paris, with costumes and sets designed by Pablo Picasso, a choreography by Léonide Massine (who was also dancing), and the orchestra conducted by Ernest Ansermet.

The premiere of the ballet resulted in a number of scandals, including a classical music riot.

According to the painter Gabriel Fournier, one of the most memorable scandals was an altercation between Cocteau, Satie, and an unnamed music critic who gave Parade an unfavorable review. Satie had written a postcard to the critic which read: "Sir and Dear Friend, You are only an arse, but an arse without music. Signed, Erik Satie." The critic sued Satie, and at the trial Cocteau was arrested and beaten by police for repeatedly yelling "arse" in the courtroom. Satie was given a sentence of eight days in jail.

The Rite of Spring, its original French title, Le Sacre du Printemps, is a ballet with music by the Russian composer Igor Stravinsky.  The original choreography by Vaslav Nijinsky, and original set design and costumes by archaeologist and painter Nicholas Roerich.  The music is widely acknowledged as one of the greatest, most influential, and most reproduced compositions in history. It is iconic for 20th century classical or avant garde European music, with innovative complex rhythmic structures, timbres, and use of dissonance. The scandal of a riot at its 1913 premier, caused by its innovative technique and content, made it one of the most internationally well-known and controversial works in performance history.

The idea for the ballet was originally conceived by the painter Nikolai Roerich.  Roerich shared his idea with Stravinsky in 1910.  The Rite of Spring was composed between 1912 and 1913 for Diaghilev's Ballets Russes and premiered on May 29, 1913 at the Théâtre des Champs-Élysées in Paris.

The ballet completed its run of seven performances amid controversy, but experienced no further disruption. The same performers gave a production of the work in London later the same year. 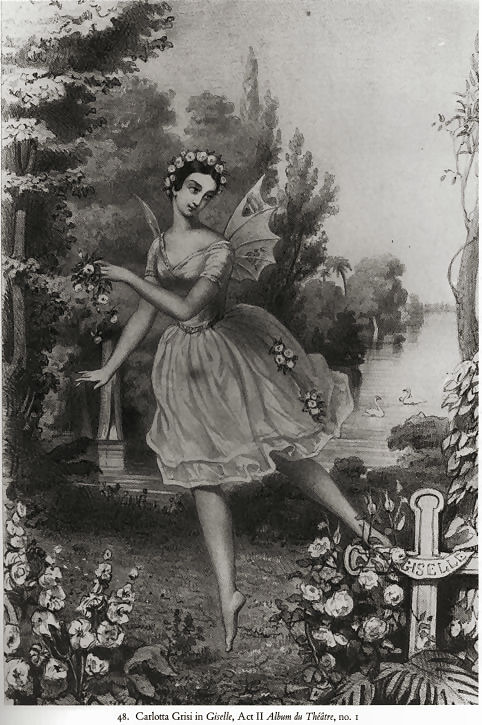 Carlotta Grisi was an Italian ballet dancer. She was born on June 28, 1819 in Visinada, Istria (now part of Croatia) and died on May 20, 1899 in Saint-Jean, a district of Geneva, Switzerland. She was trained at the ballet school of Teatro alla Scala in Milan and later with dancer/balletmaster Jules Perrot.

At her 1836 debut in London Grisi performed with the accomplished danseur Jules Perrot. She next appeared in Paris at the Théâtre de la Renaissance (1840) and a year later, toured with Perrot to other parts of Europe.

Her greatest role however was that of Giselle. The world première of this two-act ballet was on June 28, 1841 at the Theatre de l'Academie Royale de Musique, Paris.

It caused a sensation and inspired its reviewers to proclaim Giselle to be the greatest ballet of its time and a triumphant successor to the Romantic masterwork La Sylphide. As such, it immediately established Grisi as a star in her very first full-length ballet in Paris. Her salary grew from 5,000 francs to 12,000 in 1842 and 20,000 by 1844, with additional performance fees on top. Her last performance in the west was in Paul Taglioni's Les Métamorphoses (aka Satanella) in 1849).

In 1854, with her daughter, she left Russia for Warsaw, where she intended to continue dancing, but she became pregnant by Prince Léon Radziwill who then persuaded her to retire from ballet at the height of her fame. Grisi gave birth to her second daughter, Léontine Grisi, and, at the age of 34, settled near Geneva to spend the next forty-six years of her life in peaceful retirement. She died in Saint-Jean, Geneva, Switzerland, on May 20, 1899, a month before her 80th birthday.

Karsavina was a Principal Artist of the Imperial Russian Ballet and later Diaghilev's Ballets Russes. After graduating from the Imperial Ballet School, she was a leading ballerina of Tsar's Imperial Ballet, dancing the whole of the Marius Petipa repertory. Her most famous roles were Lise in La Fille Mal Gardée, Medora in Le Corsaire, and the Tsar Maiden in The Little Humpbacked Horse.

She was the first ballerina to dance in the so-called Le Corsaire Pas de Deux in 1915.  It was in late 1910 when she joined Diaghilev's Ballets Russes in Paris. During her time with Diaghilev is when she danced many of her most famous roles in the ballets of Mikhail Fokine, including Petrushka, and Le Spectre de la Rose.

She was perhaps most famous for dancing the title role in Fokine's The Firebird (a role originally offered to Anna Pavlova, but Anna disliked Stravinsky's score and refused to dance to it!) with her occasional partner Vaslav Nijinsky.