The Passing of Anna Pavlova: The Beauty of a Swan

On January 23rd of 1931, the world lost Anna Pavlova. Anna contracted double pneumonia on a train en route to Haage, and her condition deteriorated rapidly. She died in the early hours, in Haage, Netherlands. Her remains were moved to the Novodevichy Convent Cemetery in Moscow, Russia in 2001. 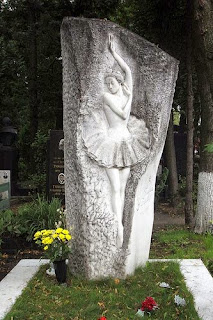 Anna was not a typical ballerina of her day. At only five-feet-tall, she was delicate and slender, unlike most of the students in her classes. She was exceptionally strong and had perfect balance. Anna was known to have had very arched feet, which made it hard to dance on the tips of her toes. She discovered that by adding a piece of hard leather to the soles, the shoes provided better support. At that time, many people thought of this as cheating, since a ballerina was to be able to hold her own weight on her toes. Anna’s idea was the precursor to the modern pointe shoe. 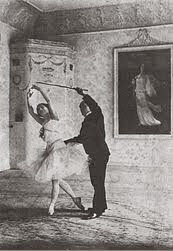 Anna Pavlova was born on February 12th in St. Petersburg, Russia in 1881. And at the age of 10 she began to study at the Imperial Ballet School. Her early teachers were Nicolai and Sergei Legat, Yekaterina Vazem, Pavel Gerdt, and her favorite teacher, and mentor until her death, Enrico Cecchetti. Pavlova's style and poetic way of moving attracted attention even as a student. After her graduation in 1902 she joined the Maryinsky Theatre as second soloist and was promoted to first soloist the following year. With Cecchetti's help she was promoted to Ballerina in 1905, and Prima Ballerina in 1906.

In 1907, Anna Pavlova began her first tour, to Moscow. On her second foreign tour in 1909, she joined Diaghilev's Ballet Russes in Paris where she danced The Dying Swan choreographed for her by Fokine with music from Saint-Saen's Carnival of the Animals. Fokine then had her in mind when he choreographed The Firebird, but when she heard Igor Stravinsky's music she pronounced it nonsense and refused to dance to it. The role went to Tamara Karsavina.

On February 28, 1910, after leaving the Ballets Russes, she appeared at the Metropolitan Opera House in New York. She danced Swanilda in Coppelia, partnered by Mikhail Mordkin. Later that year, Pavlova formed her own company, with eight dancers from St. Petersburg. In the Fall of 1911, she returned to London to take part in Diaghilev's Fall season at Covent Garden. Partnered by Nijinsky, she danced in Giselle, Le Pavillon d'Armide, Cleopatre, Le Carnaval, and a pas de deux billed as L'Oiseau d'Or. The Pavlova/Nijinsky partnership was an amazing one, but short-lived. Pavlova would never again dance with Nijinsky or appear with the Diaghilev company. 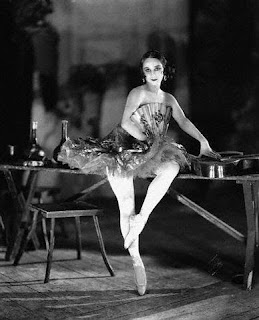 Immediately after the London season, she undertook her first tour of her English provinces, partnered by Novikoff and supported by a small group of Soloists from the Imperial Ballet. Anna remained a member of the Maryinsky Theatre until 1913, when she made her last appearance in St. Petersburg.  She spent the rest of her life on tour. In 1914, she was traveling through Germany on her way to England when Germany declared war on Russia, her connection to Russia was for all intents broken. Pavlova toured all over the world including Europe, Asia, North and Central America, and Australia. Anna was able to make eight to nine performances per week and had great interest in performing for inexperienced audiences across the world. Her performances in Mexico, India, Japan and Australia were legendary. She was overworked and exhausted by her late 40's, but still danced vigorously. She gave over four thousand ballet performances during the years between 1913-1930 travelling over a total of 300,000 miles.

In 1921 she bought Ivy House in England and opened her own School of Dance. From then on she spent the rest of her career on tour, bringing ballet to millions for the first time. Her last world tour was in 1928-29 and her last performance in England in 1930. Later, Anna Pavlova appeared in a few silent films: one, The Immortal Swan, she shot in 1924 but it was not shown until after her death -- it originally toured theaters in 1935-1936 in special showings, then was released more generally in 1956. 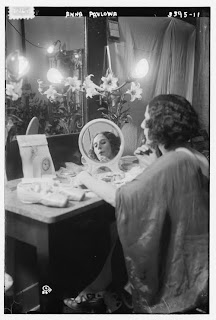 She once said "If I can't dance then I'd rather be dead." Her final words were, "Get my swan costume ready, then play that last measure softly." In keeping with old ballet tradition, on the day she was to have next performed, the show went on as scheduled, with a single spotlight circling an empty stage where she would have been.  Anna's birthday is coming up next month and I will post more information about her, so make sure to check back in February to read more!

Curtsy, Bow and Acknowledge the Orchestra, January is a true example of the “circle of life” for the Ballets Russes. While we will celebrate both Nijinska and Balanchine’sbirthday’s this month, we will also recognize the death of Anna Pavlova. Bronislava Nijinska’s birthday will be celebrated January 8th, Balanchine’s on the 22nd. And Pavlova's died on January 23rd.

Nijinska Bronislava Nijinska was born in Minsk, the third child of the Polish dancers Tomasz and Eleonora Bereda Niżyńsky. Her brother was Vaslav Nijinsky. She was just 4 years old when she made her theatrical debut in a Christmas pageant with her brothers in Nizhny Novgorod. In 1900 she and her brother were accepted at the Imperial School of Ballet in St. Petersburg on a 7-year scholarship from the State of Russia. From 1900 - 1907 she studied dance and music at the Imperial School of Ballet, graduating with honors as a ballet dancer. Her first teacher was Enrico Cecchetti. After graduating in 1908, she then joined the Maryinsky Ballet. She and her brother joined Diaghilev’s Ballets Russes in 1909. Some of the roles she created were in Fokine's "Carnaval" 1910, and "Petrushka" in 1911. Vaslav was dismissed from the Maryinsky Ballet in 1911, Nijinska insisted that she also be dismissed, and she was forced to forfeit her title "Artist of the Imperial Theatre." Nijinska danced in her brother's short lived ballet company in London in 1914.

In 1915, she returned to Russia. Nijinska danced in Kiev, opening a school where she trained her most famous student, Serge Lifar. In 1921 Nijinska rejoined the Ballets Russes. While a dancer with the Ballets Russes, she also became the chief choreographer of the company. One of her first pieces was "Three Ivans" for Petipa's The Sleeping Beauty. Her first ballets were Igor Stravinsky's "Renard" in 1922 and Les Noces 1923. The following year she choreographed "Les Biches", "Les Fâcheux" and "Le Train Bleu". Bronislava later choreographed for the Paris Opéra, Opéra Russe à Paris, and her own company. Lifar was born in Kiev and studied under Bronislava Nijinska. He was accepted into Diaghilev’s Ballets Russes in 1923.  Lifar was very handsome and known for his enormous ego. In his personal, life Lifar was as dynamic as he was controversial.  Lifar was the last of the Ballets Russes' Premier Danseurs.

Two of Lifar's greatest achievements as a dancer in Diaghilev’s Ballets Russes were in Balanchine's Apollo and The Prodigal Son.  After Diaghilev's death in 1929, Lifar became Premier Danseur of the Paris Opera Ballet. Lifar held the position of Director at the Paris Opera Ballet for 20 years, creating the majority of the choreography and dancing most of the leading roles himself.

Today, 137 years ago, on March 31st in 1872, Serge Pavlovich Diaghilev was born in the province of Novgorad, Russia . His legacy still lives on in ballet companies around the globe.

May 2009 marks the centennial of Diaghilev’s Ballets Russes company and it is being celebrated all over the world.

I just wanted to take a moment this morning to say, "Happy Birthday  Mr. Diaghilev and thank you for everything you have done for the world of dance, art and music."

Next Tuesday is Diaghilev's birthday and it is that very day I am meeting with a gentleman from the Wilmington, Delaware Preservation Society about a space they have to lend me for a Ballets Russes exhibit in Delaware.  Destiny or a coincidence?  The date was selected by them.  The space they are offering me would allow me to exhibit a portion of my collection. The intent is to invite local dance schools and balletomanes during the month of May to breathe in the history of the Ballets Russes on their 100th Anniversary.